Showdown Displays Europe introduces the Zipper-Wall produced in their own production facility. The Zipper-Wall, the well-known tube frame with a textile cover and zipper, is a commonly used exhibition wall. Also, the system is used as a divider or as a backdrop for product introductions or photo backdrop.

Unique in the market: produced in Europe and production of custom sizes on demand
The Zipper-Wall is a product that usually is produced in China and imported by wholesalers in Europe. The current supply chain situation causes very high production costs in China and also transportation costs to Europe have raised a lot. In addition to that, containers often leave with a delay, that results in long lead times.

To better serve its reseller customers and to shorten delivery times, Showdown Displays Europe produces the Zipper-Wall now in-house. By having an own production in the Czech Republic, the company can better anticipate to the demand of its customers and align its inventory and production plan. Unique in the market is now the possibility to produce the Zipper-Wall on demand in custom sizes.

Tool-free feet & affordable pricing
The Zipper-Wall Straight Basic is a 32 mm lightweight frame system, which is a standard size in the market.
Because of the tool-free feet and an easy clicksystem, there is no need to use any tools to build up the system. At the moment the system is only available in a straight version. Possibly in the near future the range will be extended with also a curved version and sitting corner. Later this year accessories will be added.

A nice benefit of the in-house production is the price. The system is available for a more affordable price than the already existing Zipper-Wall in the assortment of Showdown. The ‘old’ system will stay in the assortment and is, with its luxurious transport trolley and slightly thicker tubes of 34 mm, a premium choice.

Complete product including graphic
Showdown Displays, supplier and producer of promotional signs, display systems and POS materials has over 25 years of experience in producing display products in its own production center in Czech Republic. Previously known under the name of Jansen Display. The company produces mostly aluminium products like snap frames, a-boards, lockable notice boards and digital displays. After the merge with Promic Display Systems, mainly active in the event market, expanding with an own Zipper-Wall production is a logical step.

Next to the production of the system, Showdown Displays also has its own printing center. With this, the company is able to offer a complete solution to its reseller customers. The reseller has the possibility to purchase the Zipper-Wall including print from one supplier.

A range of new products coming up
Showdown Displays Europe launched in the beginning of March its new catalogue with over 25 new products. The new Zipper-Wall Straight Basic is along with a new steel tent, budget presentation wall and flags a great addition to the existing event assortment of the company. Next to that, a lot of new products will be added for the hospitality sector, point-of-sale and the office industry.


View the new Zipper-Wall Straight Basic
Back to blog 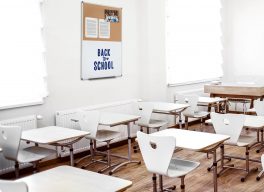 Prepare yourself for a new school and office season 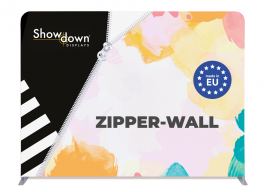 Ready to switch to our new Zipper-Wall? 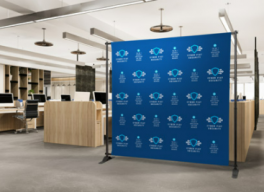 New in our assortment: Flex Wall